After Hurricane Harvey, Need for Contractors in Texas to Increase 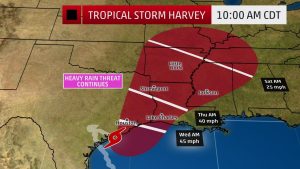 Already, the U.S. General Services Administration has requested that all current GSA-approved transportation service providers with high water vehicles contract them with information. The U.S. Federal Emergency Management Agency (FEMA), according to this notice, plans to rent 400 2.5-ton high water trucks, for a period of 72 hours. The announcement invites all GSA-approved transportation service providers who can access and provide high water vehicles to contact John Wheeler and/or Velvet Blue at john.wheeler@gsa.gov and/or velvet.blue@gsa.gov respectively.
According to the notice, The Red Cross is incapable of supplying and manning urgency needed shelter facilities in the Houston area, due to current flooding conditions. The Red Cross will use the high water vehicles to move personnel and equipment from 2700 Southwest Freeway in Houston to various locations throughout Texas. The GSA is asking for people who can provide these vehicles respond as soon as possible, ideally on Monday, August 28.
According to the National Weather Service, Harvey is this nation's first major (Category 3 or stronger) hurricane landfall since Hurricane Wilma struck South Florida in October 2005, an almost 12-year run. Harvey went from a tropical depression to a major hurricane in 56 hours. It intensified rapidly to a Category 4 hurricane with winds up to 130 mph after moving over a pocket of hot water in the Gulf.
The National Weather Service anticipates Tropical Storm Harvey to drift back into the Gulf of Mexico and meander near the upper Texas coast during the next few days, bringing more torrential rainfall to the flooded Houston metro area, piling onto record-breaking, catastrophic flooding. Localized storm total rain amounts of up to 50 inches are not out of the question, said the National Weather Service, once Harvey's rain is finished later this week. Through early Monday, parts of the southeast Houston metro area had received more than 30 inches of rain since Thursday evening.
According to the National Weather Service, latest rainfall totals (through 4 a.m. CDT Monday) include:

The National Weather Service also anticipates long-term flooding for the rest of the week and into Labor Day weekend, if not beyond.

We expect the government to make information about opportunities available as it identifies the resources it needs. We also anticipate that what the government needs will change as conditions in Texas change. For example, the government likely will no longer need high water vehicles once the flood waters recede, but may need other types of services, such as waste removal, construction, and even portable toilets (please note: the government HAS NOT issued solicitations for these items; we base this on the types of resources the government has needed in the wake of other similar disasters).
To qualify to receive a contract from FEMA or other government agencies, you only need a System for Award Management (SAM) Registration. US Federal Contractor Registration completes the SAM Registration process for its clients. We encourage anyone interested in pitching in to help in the wake of Harvey, who is also interested in learning more about or becoming a government contractor, call now to see if you qualify. We can be reached at 877-252-2700.