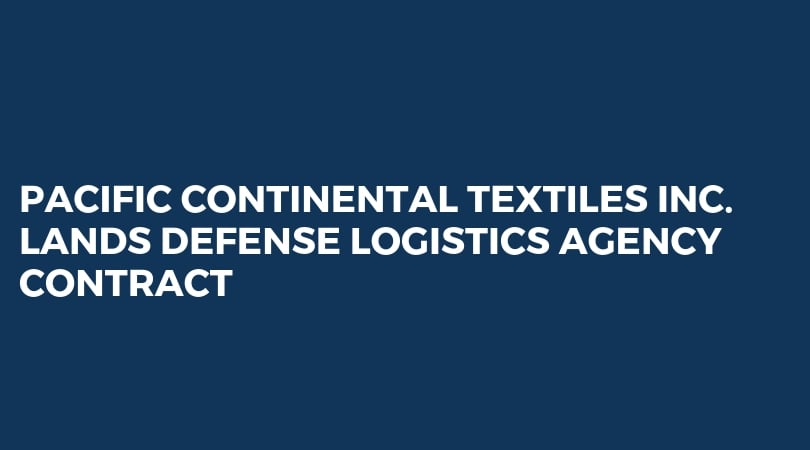 It’s no secret that a lot of America’s manufacturing has gone overseas. This couldn’t be more exemplified than with the textile industry’s move toward countries such as China, Vietnam, Malaysia, and India. This massive shift has left many factories across the U.S. closed. Pacific Continental Textiles, Inc. isn’t one of them. In fact, they’ve been manufacturing apparel and textiles for the commercial sector for 37 years. Now, with a recent contract from the Defense Logistics Agency, they’ve just added the federal government as their newest customer.

“Apparel and footwear is virtually gone in terms of United States production,” said Lou Spagna, the Chief Marketing Officer of Pacific Continental Textiles, Inc. About a year ago, the company made the decision to enter the federal marketplace. One of the biggest allures for the company to pursue government contracts was The Berry Amendment.

The policy, which has been in play since 1941, basically means that the Department of Defense is required to procure its food, clothing, fabric, fibers, yarns, hand tools, and measuring tools from American businesses. With the reduced competition in the American textile industry as well as the incentive of the DoD, Pacific Continental Textiles Inc. jumped on the opportunity. The next step was developing a strategy to actually land a contract.

“We attended the DLA Joint Advanced Planning Brief for Industry meeting in Philadelphia last November, learned a lot about the federal contracting and made many contacts,” said Lou. The approach that PCT would take toward the federal market would be to learn the process, match PCT’s capabilities with appropriate government needs and add a personal touch. Lou’s approach is that no matter the industry, you must always know your customer’s needs, their unmet needs, and how you can solve those problems for them. His goal was to also help contracting officers match a face to the name of PCT. About a year after getting registered in SAM through US Federal Contractor Registration, they landed their first contract.

“To get an award on your second attempt, I’m pretty proud of that,” said Lou. On their second bid, PCT landed a contract to provide flight deck jerseys to DLA. For those unfamiliar, a flight deck jersey is a garment worn by crew members on the flight decks of aircraft carriers. One can think of them as long-sleeved turtlenecks that are also flame retardant.

“With USFCR’s help, it made our learning curve much less steep as it could have been if we had to do it by ourselves,” added Lou. On top of getting their SAM registration taken care of by USFCR, PCT also listened in on classes taught by Executive Bid Trainer John Wayne and searched for contracts with the Advanced Procurement Portal. As for their future in federal contracting, the company plans to work to secure small to medium size contracts to develop their past performance record, and then move onto the larger opportunities.

Pacific Continental Textiles, Inc. produces both textiles and apparel. They offer a full range of knit fabrications which includes solid dyed & printed styles. The owner of the business has invested in the largest and latest generation digital printing equipment in Southern California. PCT attributes its longevity with its ability to create quality products with a quick turnaround while anticipating and reacting to changes in its industry space. With offshore manufacturers, one might need to commit to an order 6-9 months in advance. The shorter lead time of PCT’s manufacturing platform helps their clients manage their inventory more efficiently.