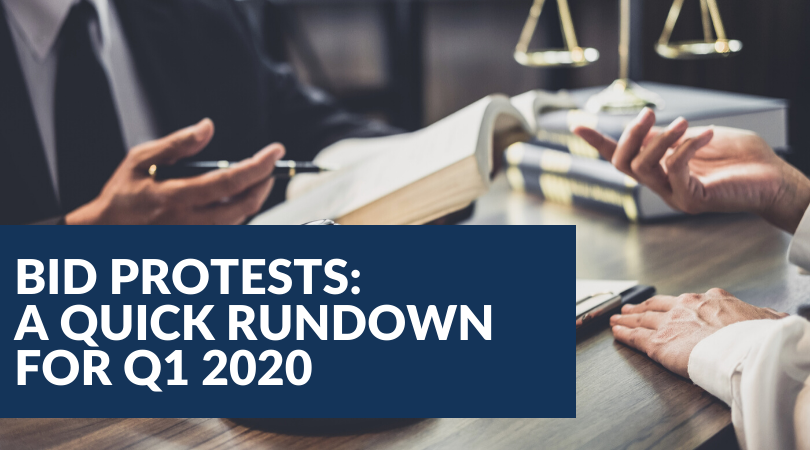 In the first quarter of the fiscal year, the Pentagon awarded its prestigious $10 billion Joint Enterprise Defense Infrastructure (JEDI) contract to Microsoft.

That's because if you've been reading up on this contract, you would know it was riddled with disputes. One of which was a bid protest made by Oracle Corporation. Then, right after Microsoft was awarded, it was expected Amazon Web Services would file one as well.

In this blog post, we're going to give you the rundown on bid protests.

We are going to answer:

What is a bid protest?

A bid protest is a dispute challenging the award of a federal contract or a federal solicitation itself.

If the protest is valid, the government agency will make the necessary adjustments to ensure free and fair competition. You might end up being the victor of the contract, but that's not guaranteed.

Why are bid protests filed?

There are many reasons why one might file a bid protest. Here are just a few of the most common ones in the federal marketplace.

This is one of the most straightforward reasons to file a bid protest. If there are signs of nepotism, bribery, and kickbacks taking place, then it's time to take action.

As public servants, contracting officers need to be impartial and unbiased toward bidders. If there are any indicators that this is not the case, then you can file a protest. This can even apply if there is a negative bias toward your business.

Government contracting is the most regulated sector in the U.S. economy. With that comes sets of rules that everyone, on both sides of the table, need to abide by. If the federal agency is not following protocol, you can file a bid protest.

Sometimes a contract can get awarded to a shady business. If you know that the awardee has a history of botching jobs and sketchy practices, you will have the case for a bid protest.

Contracting officers, like any human, can make mistakes. They also deal with thousands of solicitations across a wide variety of industries. You may find errors in the technical requirements of a solicitation. In some cases, you should file a bid protest.

Where do I file a bid protest?

Bid protests are handled by third-parties within the U.S. federal government. They are the Government Accountability Office (GAO) and the U.S. Court of Federal Claims (USCFC).

How should I approach bid protests?

In short, a bid protest is the last resort option.

The first thing that you want to do if you're considering a bid protest is to talk to the contracting officer. If the solicitation has an error, bringing it up could result in a simple modification.

Like any legal dispute, bid protests are not fun for anyone involved. Along with the initial fee, you're going to need to lawyer-up, which is going to be even more money.

If you're considering a bid protest, you need to ask yourself one fundamental question:

"Is the time and effort worth it?"

Oracle put in the bid protest because $10 billion was on the line. If you want to move forward with a bid protest, you need to be 110% sure that you have a case. Plus, even if you do win the case, you might not end up being awarded.

Take some time to learn the ins and outs of government contracting. This way, you will know if you have a case for a bid protest. For speed and convenience, go with the GAO. If you're looking for a longer and more thorough evaluation, then file one with the USCFC.

Bid protests are a serious legal matter. Before filing one, you should consult a lawyer. This is the absolute option. Make sure it's actually worth it.