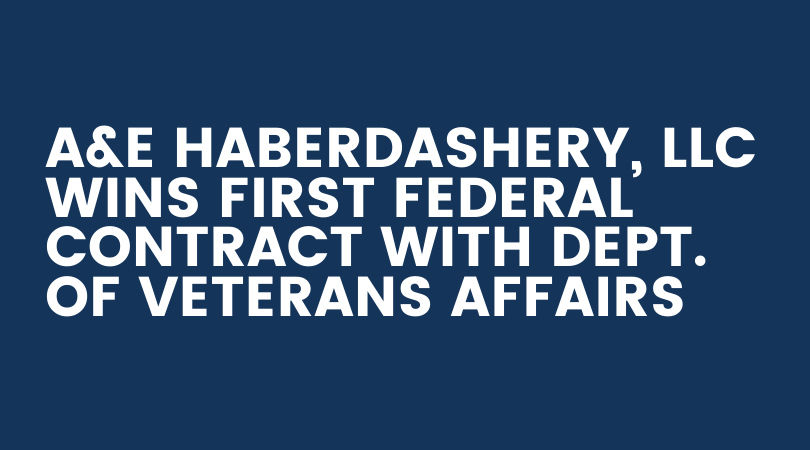 On April 16, A&E Haberdashery, LLC was awarded their first federal contract. Valued at $13,184.55, the certified service-disabled veteran owned small business (SDVOSB) will provide feminine hygiene dispensers for the VA hospital in Portland, Oregon. A&E’s recent win is just one of many examples of how a small business set-aside can truly open up opportunities with the federal government.

The “A” and “E” in their name stands for husband and wife, Alex and Erin Milholland. Out of the two, Alex is the only one who is actively involved in running the business. Around since February 2017, this small business based out of Kent, Washington got its start by selling mostly garden equipment online. A&E Haberdashery also donates 2% of their proceeds to the ENDALZ organization to help rid the world of Alzheimer’s disease.

It was because of his previous service in the military that Alex saw an opportunity to grow his business through federal contracting.

“The Department of Veterans Affairs, they are looking to companies like mine first, so it was kind of a no brainer for me to go into retail medical and help out the veterans,” said Alex.

Every year, the federal government spends around $500 billion on federal contracts. By law, about 23% of this budget has to be spent on small businesses with a 3% goal (around $40 billion) for SDVOSBs. Having an SDVOSB certification boosts a business’s chances of winning a federal contract.

To meet the demands of the VA, A&E Haberdashery expanded their range of products. Currently, they offer office equipment such toiletries, paper plates, plastic utensils, cleaning supplies, and rubber gloves. A&E also provides medical supplies such as patient monitoring equipment and the batteries needed to keep this equipment going.

Although Alex was registered in SAM and had an SDVOSB status, he saw the need for a mentor to help him navigate the government sector. That’s why he came to US Federal Contractor Registration to help learn the sector. At USFCR, he worked with Senior Acquisition Specialists Huff Bhatia and Justin Jones.

“He was able to take the bull by the horns and see not only the short term advantages of working with the federal government but also the long term wins for his company,” said Huff.

Alex placed 4 to 5 bids, requesting a debriefing each one of them. However, for his first contract, it was the government who actually reached to him. A purchasing agent asked him if he could provide a dispenser and Alex was able to make the moves to get a hold of one. Now with one contract under his belt, he looks to keep growing through federal contracting.

“It was a pleasure to work with Alex. He asked great questions and always followed instructions,” said Justin. “He will be working with the government for many years to come and I hope to remain a part of his team.”

As for his advice to contractors, Alex says, “Be vigilant, be persistent, and go for what you want.”